Three Things to say about…… buying, building and selling a successful business

I use three WordPress plugins to dramatically increase links and save time. I would not be without them. They make a big difference to your WordPress website and improve customer experience. Check them out

1 – Pretty Links The Pretty Links is a great free plugin that helps you create bespoke ULS that you can use within your blog or for external links to your website.  For example, this link takes the user to my Etsy Shop via AWIN affiliate site. It’s easy to remember and I can use it as many times as I want.

Pretty Links says that it gives you “Shareable Affiliate Links for Email, Podcasts, YouTube & More” If you buy the paid version you get even more features including geolocation and better statistics.

2 – Internal Links Manager  – The Internal Links Manager helps you automatically add links (and easily change links) on every page of your WordPress website. By linking a word to a URL then everywhere that shows there will be a link. All three plugin names on this post are linked to the plugin’s website through Internal Links. As you may have guessed the plugin works for internal and external links. So it also works well liking one post to another or to link a pots to your shop and products.

3 – RDP Wiki – this wonderful plugin help users easily add Wiki content to a blog post. Not just Wikipedia you can add links from other Wiki sites too. This is much quicker than linking to pages or using an iFrame to add links. Below I have used the RDP Wiki to add some Wikipedia content on the subject of Plug-in (computing).  You can also see how I have used it on a page on my website What Classic Car.

I hope that you also enjoy using these three great WordPress Plugins.

In computing, a plug-in (or plugin, add-in, addin, add-on, or addon) is a software component that adds a specific feature to an existing computer program. When a program supports plug-ins, it enables customization.[1]

A theme or skin is a preset package containing additional or changed graphical appearance details, achieved by the use of a graphical user interface (GUI) that can be applied to specific software and websites to suit the purpose, topic, or tastes of different users to customize the look and feel of a piece of computer software or an operating system front-end GUI (and window managers).

Applications may support plug-ins to:

Types of applications and why they use plug-ins: 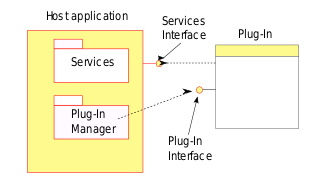 Programmers typically implement plug-ins as shared libraries, which get dynamically loaded at run time. HyperCard supported a similar facility, but more commonly included the plug-in code in the HyperCard documents (called stacks) themselves. Thus the HyperCard stack became a self-contained application in its own right, distributable as a single entity that end-users could run without the need for additional installation-steps. Programs may also implement plug-ins by loading a directory of simple script files written in a scripting language like Python or Lua.

In Mozilla Foundation definitions, the words "add-on", "extension" and "plug-in" are not synonyms. "Add-on" can refer to anything that extends the functions of a Mozilla application. Extensions comprise a subtype, albeit the most common and the most powerful one. Mozilla applications come with integrated add-on managers that, similar to package managers, install, update and manage extensions. The term, "plug-in", however, strictly refers to NPAPI-based web content renderers. Mozilla deprecated plug-ins for its products.[13] But UXP-based applications, like web browsers Pale Moon and Basilisk, keep supporting (NPAPI) plug-ins.[14][15][16]

In the mid 1970s, the EDT text editor ran on the Unisys VS/9 operating system using the UNIVAC Series 90 mainframe computer. It allowed a program from the editor and access the in-memory edit buffer.[17] The plug-in executable could call the editor to inspect and change the text. The University of Waterloo Fortran compiler used this to allow interactive compilation of Fortran programs.

If you need help with your project or business try Support From Richard – low-cost consultancy and web building services.

This website uses cookies to improve your experience while you navigate through the website. Out of these cookies, the cookies that are categorized as necessary are stored on your browser as they are essential for the working of basic functionalities of the website. We also use third-party cookies that help us analyze and understand how you use this website. These cookies will be stored in your browser only with your consent. You also have the option to opt-out of these cookies. But opting out of some of these cookies may have an effect on your browsing experience.
Necessary Always Enabled
Necessary cookies are absolutely essential for the website to function properly. This category only includes cookies that ensures basic functionalities and security features of the website. These cookies do not store any personal information.
Non-necessary
Any cookies that may not be particularly necessary for the website to function and is used specifically to collect user personal data via analytics, ads, other embedded contents are termed as non-necessary cookies. It is mandatory to procure user consent prior to running these cookies on your website.
SAVE & ACCEPT